Everyone is fishing for the right feather. My ideas…

I was the original proponent of 45 degree feather paddles, beginning  around 1981. Up until then 90′ feathers were pretty much the only  available commercial feather based on old European theories about the  upper blade slicing through the wind better and lasting slalom  requirements that the upper blade have the minimal possible lateral  profile- for tight perimeters while clearing gates. Original Inuit  paddles were very short, had 0′ feather and narrow blades- so they dealt with the wind factor in an entirely different way.

For many years only squirt paddlers used 45′ feather paddles in the S.O.  Terrik shape. They preferred the faster reaction time of the lesser  feather. I found my way to this reduced feather angle by trying several  feathers above 45′ (like 75′ and 60 degree feathers). My complaint was  that the higher feathers made the wrist on the upper (pushing) hand  twist so far back that there was essentially very poor bone alignment to the actual pushing portion of this hand- the base of the fingers. This  over-flexation left the work to be done by the tendons and ligaments of  the wrist. This would cause fatigue during a long hard day. When I tried the 45′ feather in 1981, I found that there was good bone alignment to  the pushing pad of the hand and also there was enhanced reaction time  due to the lesser work and rotation of the upper wrist involved. The  concepts were pretty simple and correct and in time (approximately 15  years) they took hold in the market.

Now 45′ feathers are popular and offered by most manufacturers, meaning the feather has been used in many thousands of paddles. I quit searching  through feather alternatives after finding that 45′ worked fine for my  needs and was basically “better” than the standard offerings in the old  days. Recently many other paddlemakers have come to experiment with  other small feather angles- from 30′ down to 0 degree feather. The basic reasoning was pretty much the same- less wrist twist (enhanced reaction time) and “better” feel. Some claim the “symmetry” of the 0′ feather  makes for no “off side” in braces and rolls. These challenges to the  “new” paradigm of 45′ feathers inspired me to rethink and re-search for  what I would consider the “optimal” feather. I had never searched for  “optimal” before. I felt I had found and was content with what was  “better”.

I soon turned away from 0′ feathers because I felt they necessitated  pushing the paddle with a much lower portion of the hand- virtually the  crotch of the thumb. I found it hard to get ANY bone alignment with this altered pushing area. But, in review, I found the 45′ feather was still more twist than my old wrists were perfectly “happy” with. I noticed at times my left blade would go though the water canted forward about 5  degrees- especially if I was concentrating on letting my upper wrist be  “happy”. “Happy” meant still getting significant connection between bone and wood but with minimal forced flexing. I found a natural  feathering of the ergonomics of how my body wanted to apply to the work  being done on each side of my boat.

I finally committed to testing the new feather of 40 degrees and found it delightful. My wrists had homed in on their “happy spots” even when  paddling very hard. This feather still allowed a strong connection  between the paddle and the “pushing pad” at the base of my fingers. It  felt “tweaked” and right. I believe 40′ feather on paddles is the most  ergonomically correct for paddling kayaks. It allows a LOT of work to  get transferred effortlessly. I consider 40′ to be the “optimal” feather (although 45 is fine too), and so that’s what I offer as “standard” on all Jimistyx kayak paddles.

I’m glad to make the feather custom to your preferences- but if you don’t  have a preference- try the 40 degree feather. It’s easy to adapt to and  does help the upper blade push through the foam of huge holes or winds  or slice through the Realm if you are deep into a mystery move- if you  happen to be going through those at any time. A zero degree feather  pretty much guarantees that upper blade will be coming back at you in  these extreme conditions- or if you happen to be landing deep in the  foam pile at the bottom of a falls. So- it might be smart to invest in a full face helmet if you love the zero degree feather. Yeah- it makes it makes you look like you are “ready to crash”~ but you ARE!

Somewhere around 30 degree feathers and less, on straight shafted paddles, you  also have the disadvantage of losing the bone to wood connection on your upper- pushing hand on your off-side. That would be the left stroke on a right-hand- control paddle. From 30 degrees and up- you can connect the bones at the base of your fingers to the paddle itself. At lower  feathers you lose that connection and end up pushing with the flesh  between the thumb and finger. I feel like this is a weaker geometry and  can lead to fatigue and less powerful strokes. Please check the pictures below to see what I mean here.

With a 40 degree feather the bones in my upper hand can directly push the paddle.

Here with a 30 degree feather, the bones of my hand are just starting to slip over the top of the shaft.

Here at 15 degrees feather the bones in my hand have no choice but to slide over the top of the shaft. 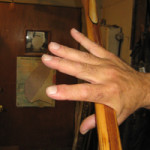 At feathers below 30 degrees, you push with the flesh between your thumb and fingers.