Rants and thoughts from the depths 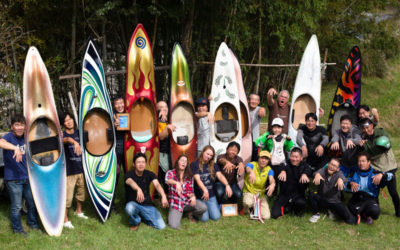 A Rose in any other country- is still a Rose

When I remember our trip to Japan this year I think of incredible meals, iconic views, steadfast friends and a few typhoons. There was a lot of excitement this year as my Guest of Honor was the new Women’s World Champion squirt boater- Rose Wall. In Sort Spain earlier... 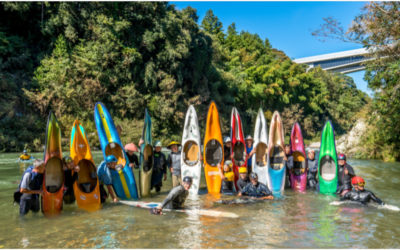 Our trip to the Squirtogether mystery move competition in Japan this year was hallmarked by some dramatic moments- some welcome- others not. First- a typhoon hit Japan about a week before our flights. Japanese mystery spots often change with floods from typhoons. And there was a significant earthquake near the home of one of our hosts and friend- Taiki Sugawara. He only had to deal with no electricity for a few days. But still- a typhoon and an earthquake make for a pretty dramatic beginning. 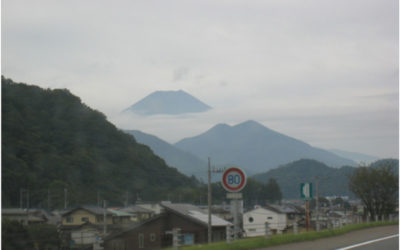 A mystery move is a convergence of currents and intent- and in our case- cultures. At the core of it, it all comes together.  Our trip to Japan this year was an example of everything coming together beautifully. I had enjoyed the previous meetings I have...

My brother Jeff is the strider:

Check out some squirt zombies:

So~ here I am talking about myself. But some of you might be curious- so here she blows:

I was born in Erie, Pennsylvania in 1954 but grew up in an eastern suburb of Cleveland Ohio~ namely Euclid. I started paddling in 1965 and soon  moved to a canvas-covered Grumman canoe with a double-bladed paddle. My  first kayak was an imported Klepper SL7. I raced a lot in my youth and  was the Middle States Downriver champ at one point. I was also an early  member of the Madhatters and Keelhaulers Canoe Clubs and that’s how I came to meet Ralph McCarty.

It seems he was starting up an outfitting business on the Lower  Youghiogheny River in Ohiopyle, Pennsylvania.  So in 1969 I became an  early raft guide for his company~ Mountain Streams and Trails Outfitters. Ralph ran his customers in decked inflatable kayaks- “duckies”. I got  my first runs down the Upper Yough in those boats. I also made my first  kayaks in the basement of the “Last Resort” facility Ralph had there.  After a couple years I went to work for Wilderness Voyageurs in the same town. Working there, I started running more challenging  whitewater including first descents of the Meadow Run Slides in Ohiopyle and the Big Sandy’s “Wonder Falls” in West Virginia.

In the late winter and early spring of 1975 I apprenticed master paddle builder Keith Backlund at his company “Woodlyte Paddles” in Lemont,  Pennsylvania. I started making “RivrStyx” directly after that. I  designed my first paddle blade- the Slasher- that year and it went on to become a popular asymmetrical blade shape for many companies. In 1976 I started working for Imre Szilagyi’s “Appalachian Wildwaters” and went on to finish my guiding career with 13 years with that  company. That’s also where I met my wife, Doris, who I happily married in 1986. The late 70’s is also  when we were getting first descents in West Virginia like Daugherty Run, Fike’s Run, and 686 fpm Quarry Run (1977). I also moved into West  Virginia to stay then! I became one of the first raft guides on the  Cheat and Upper Yough Rivers.

In 1980/81, I designed my first kayak- the Slice. It was the first commercially produced short boat in the country. The next year Jess  Whittemore kicked off the sport of Squirt Boating by discovering many new exciting moves in his long pointy squirt boats~ fun things like  Blasting and Splats. I detoured into trying to design a cartwheel-able  boat and went off to design my own shorter squirt designs. In 1983 Phoenix Kayaks started making my Arc design and an early prototype of that design (the “Baby Arc”) was the boat I did the first flatwater cartwheels in-  fetching 12 ends right off the bat in January of ’83. New Wave Kayaks started making my designs in 1985 and they were the major  factor in popularizing the sport of squirt boating. I went on to design a few plastic kayaks for them but eventually they down-sized to making  just squirt boats and the business was turned over to Paul Schreiner  (John Schreiner’s brother- John was the president of New Wave). Paul continues to make my squirt designs at Paul Schreiner Composites.  Murky Kayaks in Canada also makes my squirt designs.

Squirt boating became very popular in the late 80’s and some say it helped  spawn the sport of “Freestyle” which went on to become much more popular.  Many of the early freestyle stars were also squirt boaters. The mid to late  80’s is also when we did many first descents on creeks in West Virginia  like the North Fork of the Blackwater, Red Run, and Elzey Run. Doris and I also had our children, Nathan and Amelia, in 1989 and 1990. That was a good move.

In the 90’s I started traveling to Japan to help promote squirtboating and have been privileged to go there every year for many years now. In 1991 I developed the patented Jimirim which continues to be the optimal form of spray skirt system. I also  won the National Squirt Championships in 1993 and competed in the World Championships on the Ocoee River, placing 6th. Soon  after I joined my brother and others on a televised expedition, Rivers of the Maya, in southern Mexico featuring a first descent of the Santo Domingo River. That production went on to win an Emmy for cinematography due to the excellent work of our producer~ the famous Roger Brown.

In the late 90’s I did a short stint of design work for Perception Kayaks and was also honored with a “Legend of Whitewater” award from the  American Canoe Association. I started doing design and plug work for Emotion Kayaks in 2004. They make great recreational kayaks. And in 2006 I was honored to be inducted into the International Whitewater Hall of Fame as a “Pioneer” of the sport.

So- that’s pretty much it. My life has been centered around the sport  (after my wife and children, of course) and I’ve been lucky to have my  brother Jeff nearby to paddle with all these years. He is famous for his “Striding” ability- where he stands in an inflatable kayak while running  whitewater- very well too! I hope this all hasn’t been too boring for  you. It’s been a fun ride for me. Time well spent.